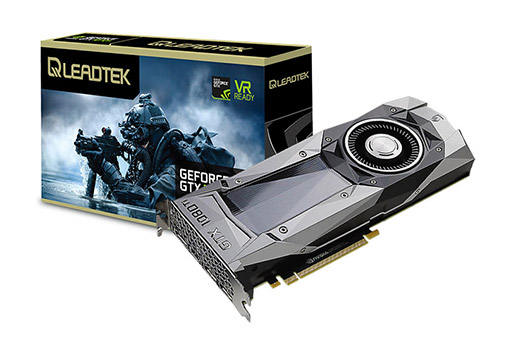 NVIDIA Pascal™
Pascal is optimized for performance per watt. The GTX1080 Ti is 3x more power efficient than the Maxwell Architecture.

16nm FinFET Process
This The GTX1080 Ti is the first gaming GPUs designed for the 16nm FinFET process, which uses smaller, faster transistors that can be packed together more densely.

Advanced Memory
Pascal-based GPUs are the first to harness the power of 11GB of Micron's GDDR5X memory. The 352-bit memory interface runs at 11Gb/sec., helping to drive 1.7x higher effective memory bandwidth than that delivered by regular GDDR5.

INNOVATIVE DESIGN
The GeForce GTX 1080 Ti is truly unique. Designed and built by NVIDIA. Crafted with premium materials and components, including a die-cast aluminum body and 7-phase dualFET power supply. And cooled by a radial fan with an advanced vapor chamber designed for consistent performance in even the most thermally challenging environments.

NVIDIA ANSEL™ IN VR
Capture and create in-game screenshots that can be viewed in 360 degrees. Compose your screenshots from any position, adjust them with post-process filters, capture 4K HDR images in high-fidelity formats, and share them in 360 degrees using your mobile phone, PC, or VR headset.