Built with 48GB GDDR6 memory delivering up to 25% greater throughput for ray tracing, rendering, and AI workloads than the previous generation. The RTX 6000 provides the industry’s largest graphics memory footprint to address the largest datasets and models in latency-sensitive professional applications.

NVENC can take on the most demanding 4K or 8K video encoding tasks to free up the graphics engine and the CPU for other operations. The RTX 6000 provides better encoding quality than software-based x264 encoders. The RTX 6000 incorporates AV1 video encoding which is 40% more efficient than H.264 encoding for 4K HDR video. AV1 will provide better quality at the same bitrate bandwidth.

Preemption at the instruction level provides finer-grain control over compute tasks to prevent long-running applications from either monopolizing system resources or timing out.

Gain unprecedented end-user control of the desktop experience for increased productivity in a single large display or multi-display environments, especially in the current age of large, widescreen displays.

Synchronize the display and image output of up to 32 displays3 from 8 GPUs (connected through two Sync II boards) in a single system, reducing the number of machines needed to create an advanced video visualization environment. 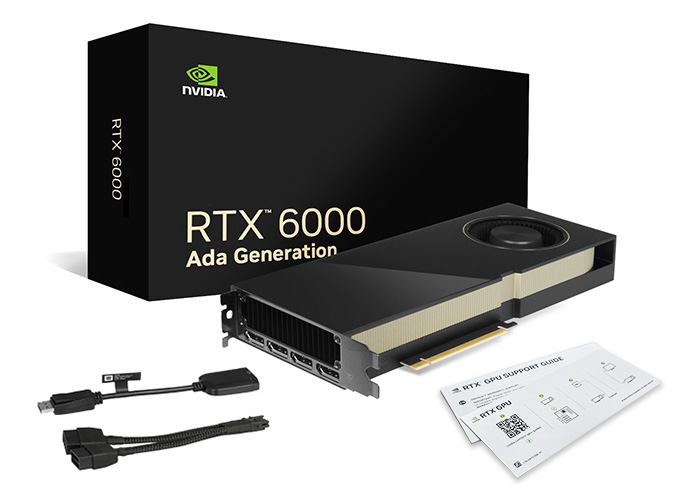 1Peak rates are based on GPU boost clock.
2Effective FP8 TFLOPS using the new sparsity feature.
3Display ports are on by default for the RTX 6000 Ada Generation. Display ports are not active when using vGPU software. Virtualization support for the RTX 6000 Ada Generation will be available in an upcoming NVIDIA virtual GPU (vGPU) release, anticipated in Q1, 2023.