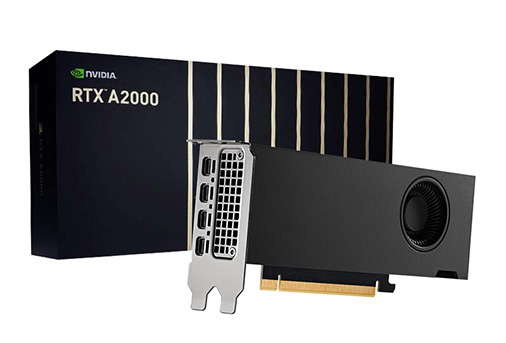 NVIDIA RTX™ technology has fundamentally changed computer graphics, fusing the power of real-time ray tracing, AI, and advanced graphics and compute to drive the next wave of innovation in visual computing. The NVIDIA Ampere architecture is the second generation of NVIDIA RTX—delivering new levels of power and performance to professional workflows, accelerating time to decision, time to market, and time to solution.

The NVIDIA RTX A2000 │ RTX A2000 12GB brings the power of RTX to more professionals with a powerful low-profile, dual-slot GPU design, delivering real-time ray tracing, AI-accelerated compute, and high-performance graphics to your desktop. Built on the NVIDIA Ampere architecture, the VR ready RTX A2000 combines 26 second-generation RT Cores, 104 third-generation Tensor Cores, and 3,328 next-generation CUDA® cores and up to 12GB of GDDR6 graphics memory with error correction code (ECC) support, another industry first in this segment. Design bigger, render faster, and work better with the NVIDIA RTX A2000 │ RTX A2000 12GB.

Available with 6GB or 12GB of GDDR6 memory, the RTX A2000 series GPUs provide an ideal memory footprint to address datasets and models in latency-sensitive professional applications and at volume.

NVENC can take on the most demanding 4K or 8K video encoding tasks to free up the graphics engine and the CPU for other operations. The RTX A2000 series GPUs provide better encoding quality than software-based x264 encoders.