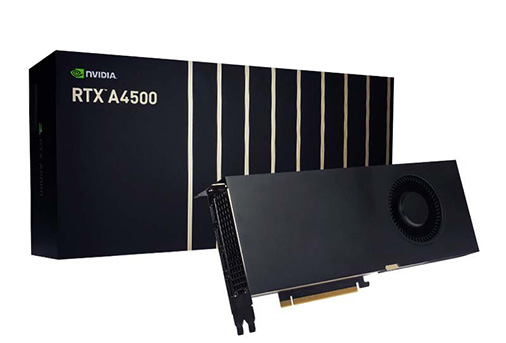 With the introduction of the NVIDIA Ampere architecture, we brought the next generation of NVIDIA RTX to millions of professionals. Featuring enhanced real-time ray tracing, accelerated AI, and advanced graphics and compute capabilities, the NVIDIA Ampere architecture enables artists, designers, engineers, and scientists to create tomorrow, today. And as the adoption of RTX technology continues to grow, with over 70 of the world's leading professional applications now accelerated by RTX technology, professionals are empowered to design, build, and entertain unlike ever before.

The NVIDIA RTX A4500 delivers the power, performance, capabilities, and reliability professionals need to do more. Powered by latest generation of NVIDIA RTX technology, combined with 20 GB of ultra-fast GPU memory, The A4500 provides amazing performance with your favorite applications and the capability to work with larger models, renders, datasets, and scenes with higher fidelity and greater interactivity, taking your work to the next level.

Incorporating 2nd generation ray tracing engines, NVIDIA Ampere architecture-based GPUs provide incredible ray traced rendering performance. A single RTX A4500 board can render complex professional models with physically accurate shadows, reflections, and refractions to empower users with instant insight. Working in concert with applications leveraging APIs such as NVIDIA OptiX, Microsoft DXR and Vulkan ray tracing, systems based on the RTX A4500 will power truly interactive design workflows to provide immediate feedback for unprecedented levels of productivity. This latest generation of RT Cores is up to 2X faster in ray tracing compared to the previous generation. This technology also speeds up the rendering of ray-traced motion blur for faster results with greater visual accuracy.

The RTX A4500 supports PCI Express Gen 4, which provides double the bandwidth of PCIe Gen 3, improving data-transfer speeds from CPU memory for data-intensive tasks like AI and data science.

Built with 20GB GDDR6 memory, the RTX A4500 delivers the memory throughput required for memory intensive tasks such as ray tracing, rendering, and AI workloads. The RTX A4500 provides large graphics memory to address the larger datasets and models in latency-sensitive professional applications.

NVENC can take on the most demanding 4K or 8K video encoding tasks to free up the graphics engine and the CPU for other operations. The RTX A4500 provides better encoding quality than software-based x264 encoders.

Connect two RTX A4500 cards with NVLink to double the effective memory footprint and scale application performance by enabling GPU-to-GPU data transfers at rates up to 112.5 GB/s (total bandwidth).

Synchronize the display and image output of up to 32 displays[iii] from 8 GPUs (connected through two Sync II boards) in a single system, reducing the number of machines needed to create an advanced video visualization environment.

i This feature requires implementation by software applications, and it is not a stand-alone utility. Please contact quadrohelp@nvidia.com for details on availability.
ii Application must be aware of and be optimized for NVLink to take advantage of this capability.
iii Product formerly known as NVIDIA Quadro View has undergone a brand transition.
iv Feature supported in future driver release. 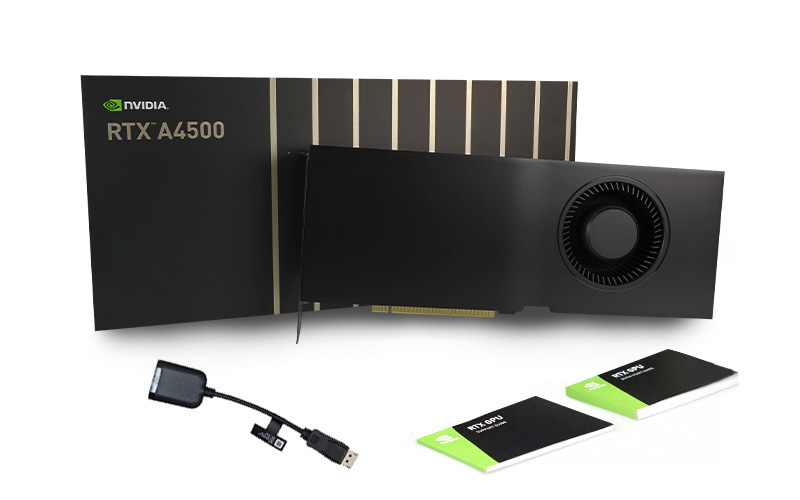